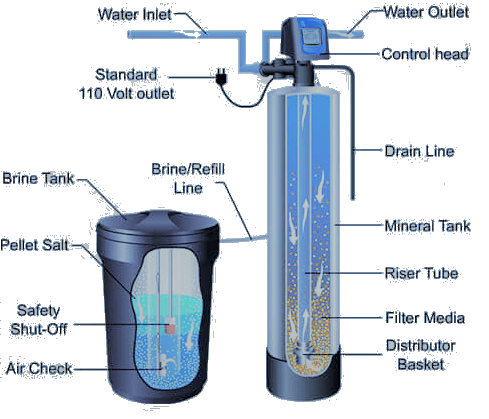 An ion exchange water softener is one of the most common components of a water treatment. Its function is to remove scale-forming calcium and magnesium ions from hard water. In many cases soluble iron (ferrous) can also be removed with softeners.

The resin tank contains treated ion exchange resin made out of small beads of polystyrene that could be 8%, or 10% (best quality) cross-linked. The resin bead exchange sites adsorb sodium ions and displace multivalent cations during regeneration with 6-10% solution of NaCl from the brine tank.

When most of the sodium ions have been replaced by hardness ions, the resin is exhausted and must be regenerated. Regeneration is achieved by passing a concentrated NaCl solution draw from the brine tank, through the resin tanks, replacing the hardness ions with sodium ions.

The resin’s affinity for the hardness ions is overcome by the concentrated NaCl solution. The regeneration process can be repeated indefinitely without damaging the resin.