In its pure state, water is one of the most aggressive solvents known to man. Called the “universal solvent,” water, to a certain degree, will dissolve virtually everything to which it is exposed. Pure water has a very high energy state, therefore, like everything else in nature, seems to achieve energy equilibrium with its surroundings it will dissolve the quantity of material available until the solution reaches saturation, the point at which no higher level of solids can be dissolved. Contaminants found in water include atmospheric gases, minerals, organic materials (some naturally-occurring, others man-made) plus any materials used to transport or store water. The hydrologic cycle (Figure below) illustrates the process of contamination and natural purification. 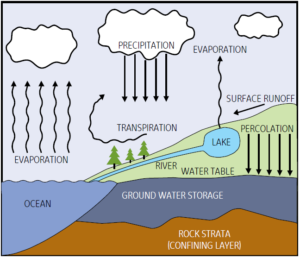 Water evaporates from surface supplies and transpires from vegetation directly into the atmosphere.

The evaporated water then condenses in the cooler air on nuclei such as dust particles and eventually returns to the earth’s surface as rain, snow, sleet, or other precipitation. It dissolves gases such as carbon dioxide, oxygen, and natural and industrial emissions such as nitric and sulfuric oxides, as well as carbon monoxide. Typical rainwater has a pH of 5 to 6. The result of contact with higher levels of these dissolved gases is usually a mildly acidic condition – what is today called “acid” rain – that may have a pH as low as 4.0.

As the precipitation nears the ground, it picks up many additional contaminants – airborne particulates, spores, bacteria, and emissions from countless other sources.

Most precipitation falls into the ocean, and some evaporate before reaching the earth’s surface. The precipitation that reaches land replenishes groundwater aquifers and surface water supplies.

The water that percolates down through the porous upper crust of the earth is substantially “filtered” by that process. Most of the particulate matter is removed, much of the organic contamination is consumed by bacterial activity in the soil, and a relatively clean, mildly acidic solution results. This acidic condition allows the water to dissolve many minerals, especially limestone, which contributes calcium. Other geologic formations contribute minerals, such as magnesium, iron, sulfates, and chlorides. The addition of these minerals usually raises groundwater pH to a range of 7 to 8.5.

This mineral-bearing water is stored in natural underground formations called aquifers. These are the source of the well water used by homes, industries, and municipalities.

Surface waters such as rivers, lakes, and reservoirs typically contain less mineral contamination because that water did not pass through the earth’s soils. Surface waters will, however, hold higher levels of organics and undissolved particles because the water has contacted vegetation and caused runoff to pick up surface debris.

One difficulty of water purity is bacterial contamination and control of bacterial growth.

Water is essential for all life. It is a necessary medium for bacterial growth because it carries nutrients. It is an essential component of living cells. Its thermal stability provides a controlled environment. Water will support bacterial growth with even the most minute nutrient sources available.